EXPERIENCE IS THE BEST TEACHER

I’ve always dreamt of becoming a member of parliament...

Meet joselyne, an 18-yearold representative of the national commission for children in nyaruguru district. Thanks to a range of experiences, including acting as a master of ceremonies (mc) at events, this ni nyampinga has taught herself how to be a confident leader. We met with joselyne to a glimpse into her leadership journey.

Leadership training for Joselyne began in primary school when she volunteered to facilitate group assignments and moderate discussions. “I listened to everyone, and if an idea needed some work, I helped the group work together to improve it,” she said. As a result, Joselyne was elected class leader. When she reached high school, she joined the media club which offered public speaking training. One of the training exercises was to answer questions from the audience. “I knew leadership required being able to speak in public, so I found this task really helpful,” Joselyne said. 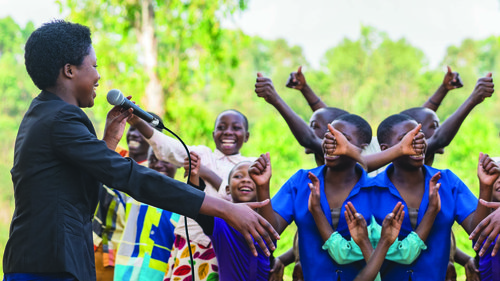 But why was Joselyne eager to participate in so many leadership trainings? She has a clear reason: “I’ve always dreamt of becoming a member of parliament, and I know it’s more likely to happen if I have experience.” That’s why Joselyne has taken every opportunity to help her achieve her goals, and being an MC is just another experience that has helped her cultivate her leadership skills. Indeed, it was around the time she started being an MC that she was elected to represent the National Commission for Children in her district.

Joselyne will never forget the first time she was an MC: “We were at the National Children’s Summit and the Executive Secretary of the National Commission for Children asked us to find an MC for the day.” Joselyne wanted to put herself forward but was nervous. When she told the classmates that she wanted to do it, they convinced her she was capable, and that she only needed to be confident. “I eventually put my name forward, and I was chosen to moderate the summit.” From that day on, Joselyne MCs every chance she gets. 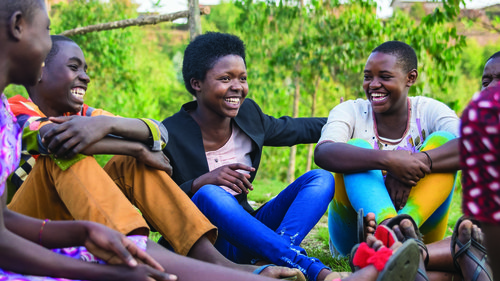 These experiences have had an unexpected benefit for Joselyne. “They helped me to respect time. In the past, I wasn’t good at managing the time I had to speak,” she said. Moderating events has trained her to stick to time because she now knows how frustrating it is when someone runs over. Joselyne also told us that sticking to time is easier said than done: “One day I was standing in front of a group and I had to choose my words carefully because we were in a rush. Choosing exactly the right thing to say was so nerve-wracking that I almost didn’t know what to say! But over time I’ve become more experienced.”

Joselyne concluded our interview by reminding all Ni Nyampingas that you need to work hard to achieve your goals. “When you practice, you iron out any difficulties and can perfect what you’re doing.” 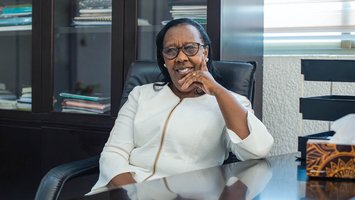