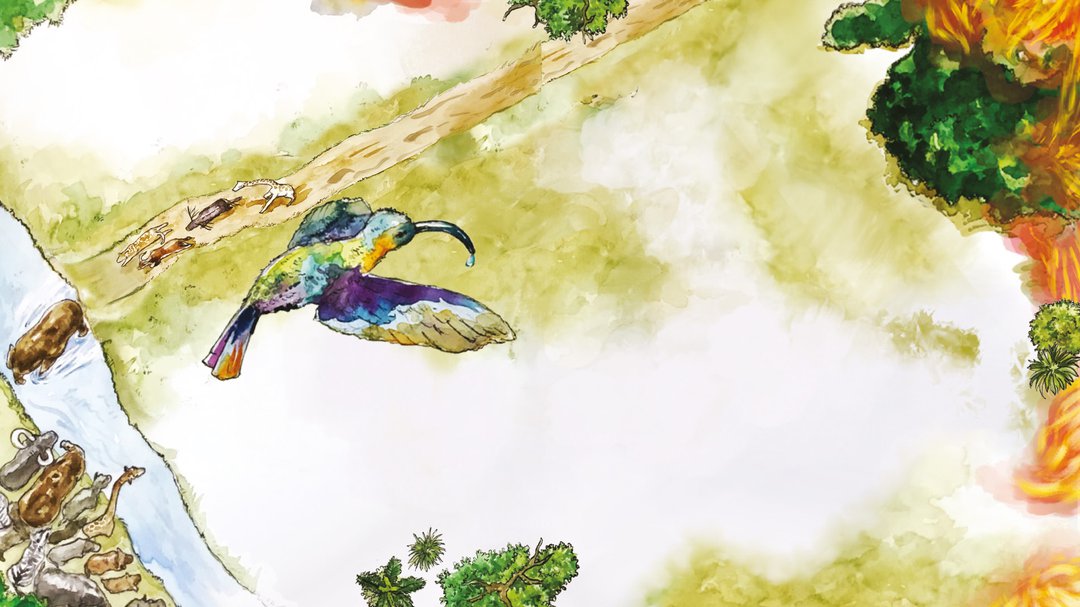 All the other animals watched in disbelief...

Have you ever tried to do something but became discouraged? It’s happened to me before. When I wanted to start a youth savings group in my village, most of my friends said it was too much, and that I was too young. I really felt powerless and decided to abandon the idea – until I heard the story of the hummingbird. This tale inspired me and gave me the confidence to try again. When I did, I brought together ten people, and we created the group. I’m happy to share the hummingbird story with you, and I hope you enjoy it as much as I did!

One day a devastating fire broke out in the forest, and the huge woodland was quickly engulfed in a raging wildfire. Frightened, all the animals fled their homes and ran out of the forest. As they came to the edge of a stream they turned to watch the fire, feeling dismayed and scared.

They were very sad about the destruction of their homes, and no one thought there was anything they could do about the fire – except for one little hummingbird.

The littlest of creatures decided it would do something. It swooped into the stream and picked up a few drops of water and went directly into the forest and sprinkled them on the fire. Then it went back to the stream and did it again. It kept going back, again and again, and again.

All the other animals watched in disbelief. Some even ridiculed the hummingbird: “Don’t bother, the fire is too big and you are too small," “Your wings will burn and your beak is too little," “It’s only a drop, you can’t put out this fire.”

As the animals stood around disparaging the little bird’s efforts, it noticed how hopeless and forlorn they looked. One of the animals shouted out and mocked the hummingbird: “What do you think you are doing?”

Without hesitation or losing a beat, the hummingbird looked back and said, “I am doing what I can.”

Are you inspired by the story of the hummingbird? It’s such a powerful story that when I heard it, I felt encouraged to start believing in myself, in what I am capable of doing to help change things for the better – whatever small contribution I am able to make.

This story also inspired Wangari Maathai, a Kenyan environmental activist who became the first African woman to be awarded the Nobel Peace Prize in 2004. Nobel prizes were created by industrialist Alfred Nobel and are given to outstanding individuals for their contribution in a range of fields. Wangari was recognised for her contribution to sustainable development, democracy and peace. After reading the story, she said everyone should feel like a hummingbird and do the best they can to solve issues around them.

What did you learn from the story of the hummingbird? Let us know by sending a message to 1019.