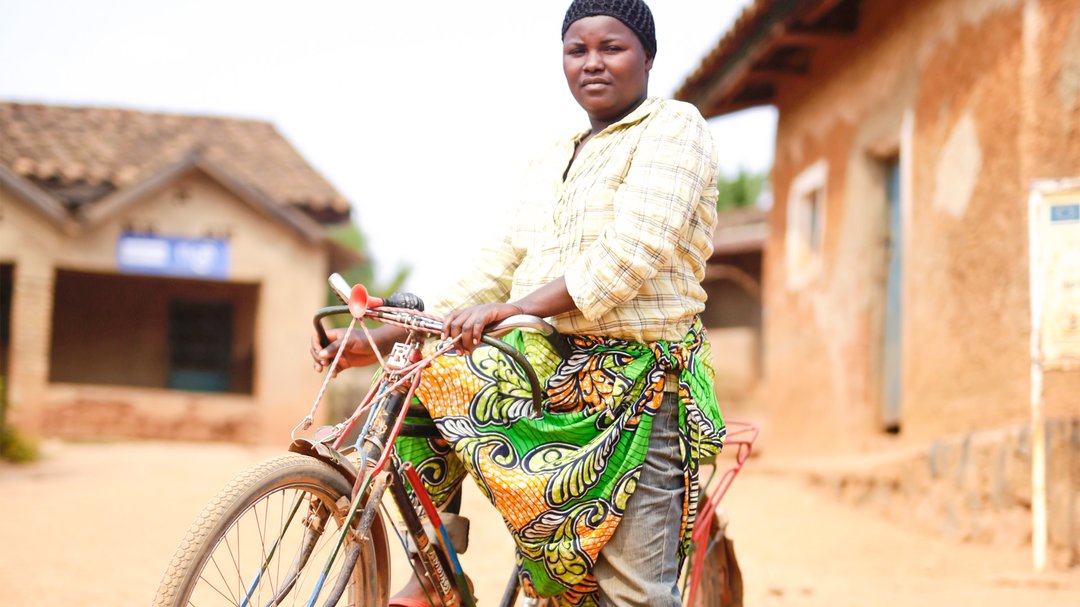 PRIDE AND PURPOSE: MY JOB

While there were some who laughed at her, others appreciated her bravery...

When Ni Nyampinga traveled to Rubuga in Nyaruguru district, we met a young woman in black trousers with a wraparound over the top and a long sleeve shirt. Donatille was riding a bicycle. She told us that her day-to-day work is transporting people by bike, and we were curious to know how she learned to ride and how she made it her job – especially when people are not used to seeing women riding bicycles. We asked donatille to tell us more!

Donatille is 28 years old and was born in Bugesera District. While growing up there, she learned how to ride a bike (it is strange to find someone who does not know how to ride a bike in Bugesera). Telling us her story she said: “At the age of 12, I started to learn how to ride using my parents’ bike. Because I was small, I could not sit on it properly. Instead, I put my leg over the crossbar, and I asked my friends to push me to get going.”

In the beginning, she would often fall over, and sometimes she felt discouraged and afraid to continue. But because she loved it so much, the next day she would always try again. At the age of 15, she felt confident and could ride a bike properly.

At that time, she liked being sent somewhere by her parents because it meant she had an opportunity to ride the bike. Later in life, she moved to Nyaruguru and got married.

Donatille told Ni Nyampinga that when she arrived in Nyaruguru, she found that bike riding could generate an income because there were few people who could transport people by bicycle, and all of them were men. 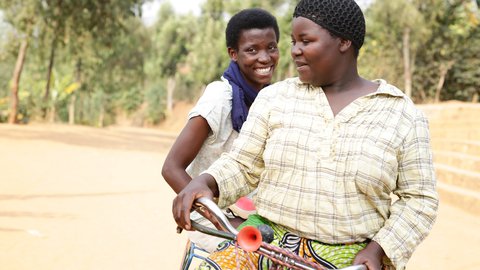 “I remember in 2015 when my child got sick and my husband was in Kigali, I sat down and thought: ‘I know how to ride a bicycle and I have one. Why shouldn’t I use it to find money to take my child to hospital!’ That’s when I decided. I took the bike, went to the health centre, and from then on it has been my occupation.”

But for Donatille, it was not all smooth riding; when she began it was hard to find clients. So how did she handle this challenge?

“I went to the place where people who ride bikes usually are. At the beginning, customers would come and use other riders. So, I decided to park the bike and started to call clients, telling them that if they needed someone to carry their luggage or even themselves, I was the one.”

“Then someone came and asked me to carry their luggage and I got enough money to take my child to hospital. Nowadays, I transport people and their goods with my bike. With the income I earn, I can pay for some of our household expenses and save money as well,” she added.

Even if the lack of clients at the beginning was one of the main issues, Donatille said she faced harder challenges after deciding to make it her job: “People would mock me and children would yell at me. Sometimes I didn’t want to go to work, but I made up my mind and said to myself: better to laugh at me because I am working to develop myself than laugh at me because I am poor.” Donatille said that sometimes her customers did not have confidence in her and thought she would fall. But eventually they got used to her, especially when they saw how hard she works.

While there were some who laughed at her, others appreciated her bravery. Nyabyenda, who is also a biker and works with Donatille, said: “I was surprised the first time I saw her riding a bike. I did not think she could carry a single kilogramme. But this was not the case. She works hard. She also has a plan for her personal development. I really appreciate that.” 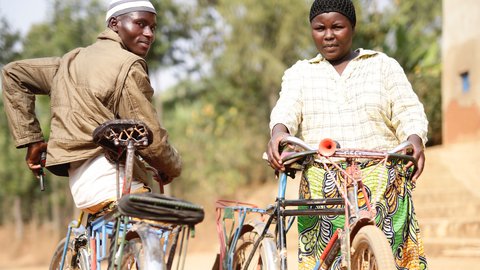 Esperance, one of Donatille’s clients, said she considers her a role model. She told us she is no longer scared to try something new because she knows that Donatille dared to do something different that was not traditionally done by girls and women in their area.

When we asked Donatille what message she has for other Ni Nyampingas, she said girls should ignore people who try to discourage them, and that they should use and share their knowledge to help build their lives and the lives of others.

“Because I dared to do something different, which was unusual in this area, girls asked me to teach them. Now, when I have time, I show them how to ride a bike.”