THE BEAT OF MY OWN DRUM

Home to Rwanda’s royal palace, folklore and rituals, Rukari in Nyanza district is rightly considered an important place in the history of the country’s pre-colonial kingdoms. When Munezero, a 19-year-old Ni Nyampinga, visited Rukari and heard traditional drumming, she quickly fell in love with it. That day, she decided she would teach herself and now Munezero is an accomplished drummer. Ni Nyampinga met her during practice and found out more about her musical journey. 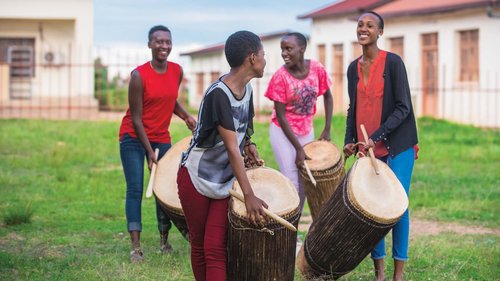 When Munezero was just 11 years old, she often visited the drummers at the Rukari Royal Palace. Just one year later, she felt confident enough to put her newfound love of drumming into action. “It looked easy when I saw others doing it, but when I tried it was much harder than I expected,” she said. Because Munezero didn’t have her own drum, she used empty jerry cans instead. She soon realised the rhythm and sound they made were no match for the real deal.

After twelve months of trial and error, she approached the drum teacher and asked for support: “I asked how I could improve the way I played.” The teacher told her that she must first love drumming and recommended she start by learning traditional dance, which is performed to the beat of the drums. Munezero began dancing lessons right away and used the opportunity to play the drums to the rhythm of the dances. “I loved it so much that I would arrive early to play and practise again after dancing,” she told us. 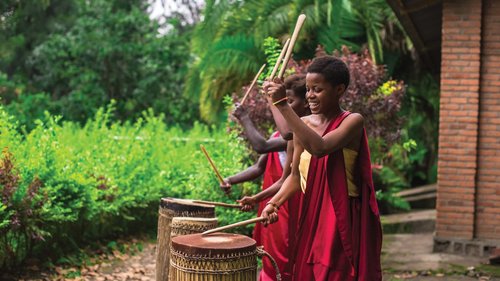 Munezero kept practising as soon as she arrived home by beating sticks against jerry cans - something that often annoyed her family: “I made so much noise that my mum would come to stop me.” Munezero went somewhere far away to play, but felt discouraged and wanted to quit. “One day, I thought to myself ‘what if I quit drumming and focus on dancing? I am better at dancing.’” But her love for the drums kept her going, she says. After three years of practice, learning from others and acting on constructive feedback, she has become so good at drumming that she can play up to three drums at once. Her new goal is to play up to 12 drums - or even more!

The main challenge Munezero faced on her musical journey was lacking real drums to play. That’s why she often ended up using jerry cans. She found that it was also difficult being a girl who plays the drums because in the past only boys were allowed to. “I wondered why I never saw other women playing the drums, and I thought it was forbidden. But I told myself 'I’ll just play somewhere no one can see me.'" However, by reading newspapers and watching TV shows, Munezero later discovered that there were other female drummers across the country. This motivated her to keep playing no matter where she was or who saw her.

Even though Munezero taught herself to drum, she never forgets the people who supported her along the way. “I’m thankful to my father who encouraged me and told me that if I work hard, I will go far.” Her dad told her that her grandfather was also a traditional drummer, which only served to encourage her. She is also grateful to the teacher who gave her advice whenever she needed it. When other girls hear Munezero playing at events organised by Ingenzi Culture Troup (she is a member), they are amazed and inspired to follow in her footsteps. Munezero wants other girls to believe in themselves too: “First discover what you’re passionate about, then dedicate time to it and put in the hard work by practising as much as possible. 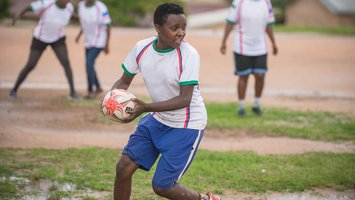