“When I learned I was pregnant I felt utterly hopeless”

After talking with providence on the phone, we were very excited to meet her in person. We caught up as she was wrapping up her day at work as a supervisor for a road maintenance project. Providence is 21 years old with an enormous smile. We chatted with her as she brought us back to her home to meet her family. When we reached her front steps, her four-year-old daughter came bounding up to her and providence scooped her up in her arms.

Although we had only known her for a short time, we could already tell that the Providence we were speaking to was totally different from the Providence of five years ago. This was because Providence thought her life had come to an end when she found out she was pregnant. “When I learned I was pregnant I felt utterly hopeless,” she said. “I felt like my life was over.”

After she found out she was going to have a baby, life became extremely difficult for Providence. Her friends abandoned her and everyone in her class at school started spreading rumours that she was a prostitute. Nobody wanted anything to do with her. It got so bad she felt she couldn’t keep going to school –so she dropped out. Feeling completely alienated she stopped going outside so she could avoid the gossip, but still the news of her pregnancy spread. Even after Providence gave birth to her daughter, she continued to feel isolated and unhappy.

Providence felt her actions had brought shame to her family. “I know my mother was upset about what people were saying about me,” she said.

One day, Providence was sitting at home when she saw a group of children walk by reading Ni Nyampinga. They seemed very excited about it–their heads were buried inside copies of the magazine. Providence ran outside and asked if she could borrow one. In that very issue she read the story of Claudine, a young girl who got pregnant and who, after going through a difficult time, went back to school, graduated and got a job.

Providence told us that when she first started reading Claudine’s story she was so emotional she got up and shouted with excitement. As she read it, happiness filled her heart and overflowed into a fit of giggles. When she finished the article her eyes were filled with tears of happiness. She had just read the story of a girl who had done the impossible. “I was so surprised to see a girl who managed to go back to school after having a baby,” Providence said. “I thought that was impossible! Her bravery encouraged me to completely change my life.”

Providence was motivated to return to her studies like Claudine had. She read her mother the story and got her immediate support. “You’ve always been so intelligent,” her mother told her. “I know you can do what Claudine did.”

Providence’s mother offered to help pay for her education and take care of her baby while she was at school. So Providence did what she never dreamt she could. She went back to finish her studies. “I kept a copy of the magazine with me at all times,” she said. “When I felt depressed or hopeless I’d read Claudine’s story again. It was the only thing that would give me strength. I felt like I had to follow in her footsteps.”

Providence continued to work hard and, in time, she completed high school. “I’m so proud that I have my high school diploma,” Providence told us with a smile. “I wonder what I would have become if I hadn’t read Claudine’s story!”

Today, Providence has several part-time jobs and is working towards joining the police, the job of her dreams! 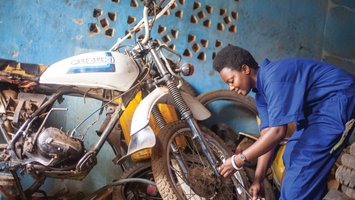