Honorine was incredibly passionate about school and aspired to graduate and develop herself...

On a bright, sunny day in March 2016, Honorine sat alongside her classmates, waiting to receive her graduation certificate. Although her classmates towered above her, she sat tall and proud. She says there was nobody happier in the whole room. Honorine is the only dwarf to have graduated from the Kigali Institute of Management that year, and within only eight days of the ceremony, she had begun work as a project manager. But just a few years earlier, in the middle of high school, she was failing at her national exams. This is the story of how Honorine faced failure and succeeded in everything she ever dreamed of.

Growing up, Honorine was incredibly passionate about school and aspired to graduate and develop herself. “But walking was difficult for me, and my primary school was so far,” says Honorine, who explained to Ni Nyampinga that to get to school she walked for an hour due to her disability - a distance that others walked in only ten minutes

Her resilience and her desire to finish school encouraged her parents to support her. They managed to find a house closer to school where she lived with her siblings, one of whom used a wheelchair due to disability. Living together, they supported each other in walking to school and studying in general.

Honorine also faced the challenge of weakness in her arms, which forced her to write slowly, meaning she couldn’t finish her exams on time as her other colleagues did. “I told my teachers about it, and they accepted to give me additional time to finish my exams, and I performed really well,” Honorine says. 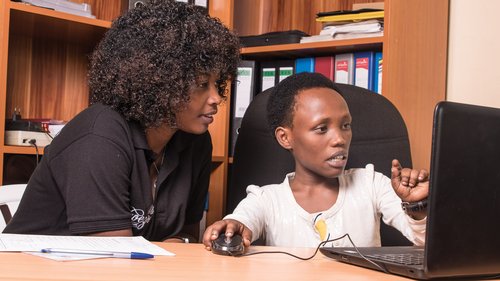 Nevertheless, it was still difficult during national exams because when she was under the supervision of instructors who didn’t know her well, she had to complete the papers in the set time. This, unfortunately, meant that she failed most of the time. “It hurt when I failed, and yet I knew I was smart,” she confided.”

“My parents kept supporting me, and my mother told me that studying would help me to make a living, and that I could do it.” Honorine says she received encouragement from her family, and that she began feeling “stronger and stronger."

Due to different obstacles related to her disability, she failed the Ordinary Level national exams. This was a shock to her and her parents who believed she would succeed despite everything she had faced. But Honorine did not give up, and because what happened was not her fault, she went into Senior 4 and continued her academic journey.

Honorine studied and worked hard to overcome the obstacles she met. She later graduated from high school and when she was admitted to university, she was very excited. You may think that going to university meant that her challenges were over, but that’s not the case. “We were taught by a foreigner who spoke English so quickly that I could not understand everything.”

But Honorine found a way to solve this challenge as well: “I decided to sit at the front so that when the teacher was talking, I could watch carefully and understand what was being said.” 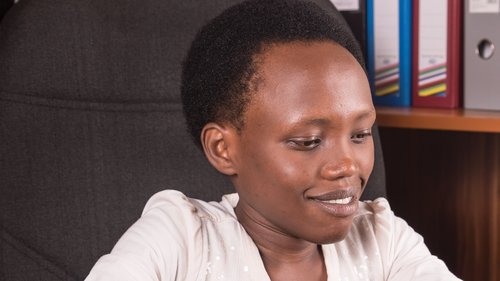 Just eight days after completing her university journey, Honorine was hired as a project manager where she has to design projects for people with dwarfism to develop themselves. By working with the Union of Little People in Rwanda, she was able to start her Master’s Degree and pay her school fees herself. “I am proud that I graduated and found a job in my field of interest.”

Wrapping up the conversation with Ni Nyampinga, Honorine explained some of the things you can do to overcome barriers at school and life in general: “You need to know the right time for revision, as there are hours when it’s hard to focus - maybe because you are tired. Before looking at the challenges you encounter, understand what you want to achieve. It should have more value and meaning to you to soften the issues you face.” 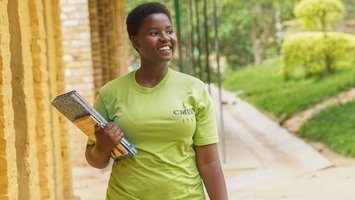 NEVER TOO OLD TO LEARN

After two years out of school my uncle told my dad that I should go back...