HOW TO BECOME A GREAT LEADER

When Jeanne was young, she struggled to lead her peers at akagoroba k’abana (a children’s community gathering). One day, she had to give a speech and was instantly gripped by fear. Looking out at the audience, her palms were sweaty, her knees shook and she almost fainted. At the end, she realised that she had left out all the important points. Today however, Jeanne is 17 years old and is the head girl at her school in Nyamagabe district. She told Ni Nyampinga how she learnt to lead with the help of a mentor.

Jeanne was 11 years old when she had her first leadership experience at the Akagoroba k’Abana. When she reached secondary school she was elected to represent a prayer team, but she wondered if she was up to the task and even thought of turning down the role. But then, her school headmaster announced that there would be a mentorship programme for the school’s leaders.

“When the headmaster told me about it, I saw it as a solution to the problem I faced. I couldn’t wait for the programme to begin,” Jeanne told us.

On the first day of the workshop, the mentor defined the traits of a good leader. Jeanne realised she did not have all the characteristics that were listed and that her leadership style was not consultative. “I felt whoever needed a leader should reach out to me. I thought they didn’t need help,” she said.

During the workshop, Jeanne learnt good leaders communicate effectively, share ideas, are confident enough to speak in public, and are thoughtful. A leader should also be trustworthy. 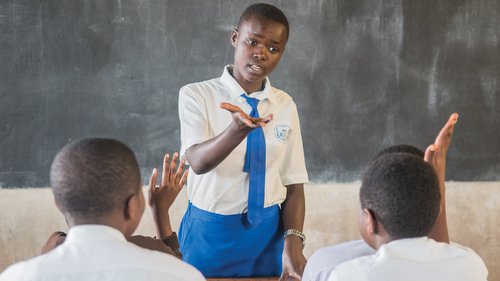 After the training, Jeanne was elected Head Girl of the whole school and did her best to be a good leader. “In the past, when I told people to line up, that was it, no discussion. But when I got back from the training there was a change, and I gave my peers time to ask me questions and to share their thoughts with me,” said Jeanne, who told us that this kind of leadership was beneficial because she learned from those she led.

Jeanne learnt that being confident and a good public speaker were among the traits of a leader. “I used to find it hard to pronounce some words, but I practised hard, and now I can speak eloquently and am no longer afraid.”

When Jeanne found out that a leader should think big and be creative to solve problems, she and her peers asked their school leaders for a girls’ room, which they have now.

Though she became a better leader, it was not easy for Jeanne to put into practice what she learned: “It was hard, but I knew it was possible.”

It was particularly difficult for her to approach her peers as the Head Girl. “When I took up the role, some of the students were afraid of me, and I felt like quitting,” she said, remembering one day when she approached a student who was always lonely, but the girl told her she was fine. “I offered to help her, and eventually she she agreed. This happened several times with other students but as time went by the students opened up to me,” Jeanne said.

To conclude, Ni Nyampinga spoke to the headmaster at Jeanne’s school. He confirmed that Jeanne is indeed a great leader, saying: “Jeanne is an exemplary student, she is now good at public speaking, and she welcomes advice from others.” 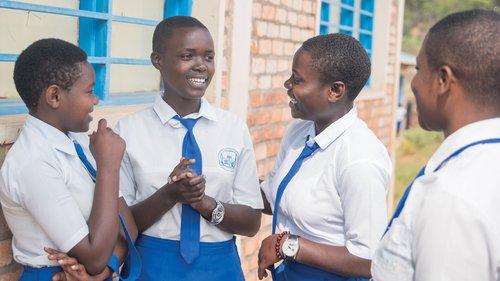 TIPS FOR BEING A GOOD LEADER: 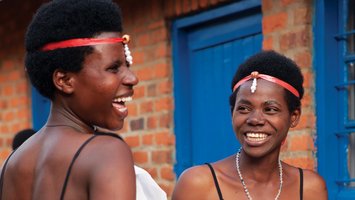 WE ARE A TEAM

Clubs are a great way for girls and boys to come together to develop friendships. Ni Nyampinga paid a visit to two clubs.