She chose to roast meat and then started to learn how to do it...

When you reach Rilima in Dugesera district, your nose will be hit with the smell of roasted meat. Following the smell leads you to Delphine’s grill. She is the only woman in this area serving roasted meat - a Mucoma - as they are known locally. How did Delphine decide to do such a job, especially given it’s not something many women in Rilima do? In an interview with Ni Nyampinga, Delphine told us how she embraced this work and the change it has brought to her life.

Delphine is 31 years old and a mother of two sons. She told Ni Nyampinga that she started roasting meat to be able to care for her children after separating from her husband who used to support them. It has now been seven years since she started, and Delphine says she couldn’t imagine doing anything else.

Like most people, Delphine had never seen a female mucoma before. One day, she went to look for a job in a convent and they asked her to choose one from what they had available. She chose to roast meat and then started to learn how to do it. She followed what the other mucomas were doing and she used the kitchen materials that were available at the convent. Soon, she started to do it professionally.

Delphine told Ni Nyampinga that after learning how to roast meat and becoming well known, she decided to go out on her own. She immediately got many clients who loved what she was doing. Delphine now has a regular spot where she works from, and she sometimes goes to roast at people’s places when they ask her to.

Showing her passion for her job, Delphine told Ni Nyampinga, “I cannot abandon my grill because of how beneficial it has been to me. Even if I move somewhere else, I will find a way to do it.”

One of the reasons Delphine has so many clients is because of how tasty her meat is. She told Ni Nyampinga that apart from the people who come to her out of curiosity - because she is the only woman mucoma in the area - when they taste her meat, they can’t help but keep coming back. 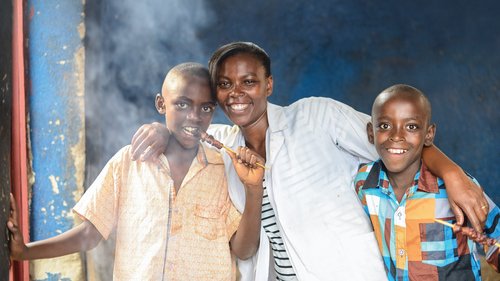 “The first time I saw her, I was astonished! I ate the meat and hadn’t thought it would be good enough to force someone to come back, but now I cannot go without passing by Delphine’s place. The meat is just so good,” said Hamisi, a local driver.

Delphine’s job has changed her life. Today, she has her own house and two pieces of land that she bought from the money she earned from grilling. She also told us the impact it has had on her family: “My children will always be able to eat meat, and I can afford their school fees and their health insurance.”

As her only occupation, Delphine told Ni Nyampinga that she opens at seven o’clock every morning after sending her children to school. When she arrives, she prepares the meat and starts to cook. With the smell of freshly roasted meat in the air, the clients keep coming.

At noon, Delphine goes to feed her children, and then returns to work until the evening. When she gets home, she counts how much money she earned that day. Now that she earns a regular income, it’s easy to ignore those who used to criticize her.

“They used to mock me when they saw me sitting on a bike carrying a goat. But I was saving the 500 francs that another bike would have cost me to transport the goat! I used the savings to buy my house and other things.”

Based on the happiness she has found in her job, Delphine shared with us her advice for those who want to start a career where they live.

“The first thing is to dare to be bold and know what is needed where you live. The second is to like it, and then you simply start to do it.” 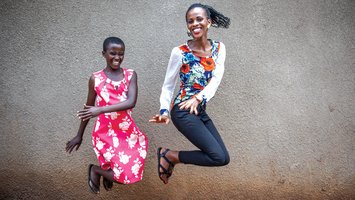 MY BEST FRIEND AND MY ROLE MODEL