I LOVE WHAT I DO

There are no jobs meant only for boys or only for girls, even if society stubbornly seems to think so. Rather, if you love something and work hard, you can have any career. Clementine, who is 21 years old, understood this and decided to study water engineering in high school. Today, she is a plumber. Ni Nyampinga visited Clementine in Gicumbi District where she was repairing a water tank. She explained to us how her job has changed her perception of herself, boosted her confidence, and helped her to realise that girls can achieve anything.

When she was growing up, Clementine’s father was a plumber. Whenever a water pipe broke and no one was available to fix it, she felt the need to do it because she could use her dad’s equipment. “That’s why I decided to study water engineering.” Clementine told us that she started going to work with her father to see how it’s done. Her father never denied her the opportunity because he believed that the job could be done by both girls and boys. He taught her the basics and Clementine decided to study the subject in high school. 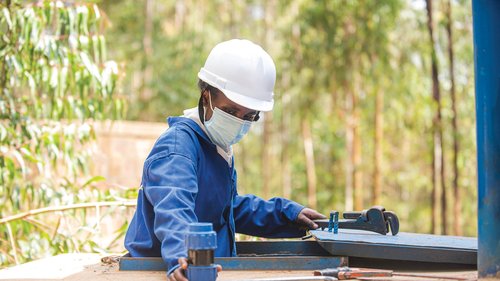 When we asked Clementine about the challenges she has faced in her profession, she told us that people couldn’t quite conceive the idea of a girl wearing overalls and being a plumber. Some of them believe it’s a man’s job to climb up and fix stuff. “At first, they would call me a tomboy or a prostitute. Some of them discouraged me and told me to quit. But I ignored them because I knew what I wanted,” she said.

When we asked her why some people still think that there are jobs meant only for men, she said: “Long ago, there were some jobs that girls were forbidden from studying or pursuing. They used to say that girls should not climb up buildings or do physical labour. These beliefs are old- school and need to change.” When a girl does a job that society considers to be for boys, she is often perceived in a negative light and gets called names. This is wrong because there are so many girls who do such jobs and are successful. 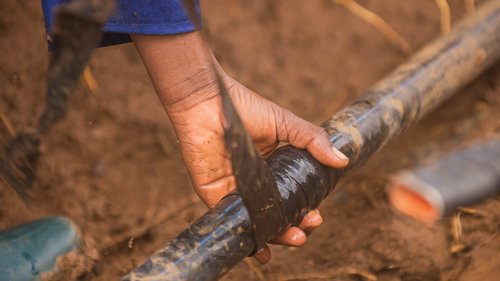 Clementine told us that she never gave up and instead worked hard to prove that she is able and loves what she does. Soon enough, people started to support her. Today, she is a role model for many young women who aspire to be like her. Clementine believes that girls can do any kind of job and succeed. These days, Clementine earns enough from plumbing to make a living, and she has managed to overcome her fears and feels confident in what she can do and the respect it brings.

For Clementine, her work has affirmed her beliefs: “It convinced me that girls are capable and can achieve anything as long as we set a goal.” Clementine, who was wearing a cap with the words ‘WORK SO YOU WON’T STEAL’, concluded by sharing a message to all those who still believe that there are jobs girls can’t do. She said that they should change their beliefs because we are in a century of revolution: “People should support girls through every career they want to pursue. They should uplift them instead of discouraging them because ajobisajob.” 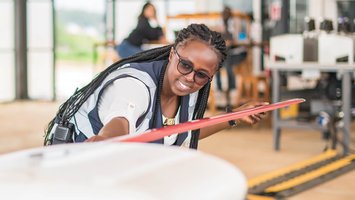 LIFE-SAVING TECHNOLOGY IN MY HANDS

...I operate drones that save lives