BECAUSE WE ARE STRONGER TOGETHER!

It’s never too early to lean in.

SHERYL SANDBERG IS ONE OF THE WORLD’S MOST INFLUENTIAL WOMEN IN TECHNOLOGY AND HAS BEEN VOTED ONE OF THE 100 MOST POWERFUL WOMEN GLOBALLY. AS FACEBOOK’S CHIEF OPERATING OFFICER, SHE LEADS AN ONLINE SOCIAL NETWORKING SITE THAT CONNECTS 1.71 BILLION PEOPLE – THAT’S MORE PEOPLE THAN LIVE IN AFRICA AND SOUTH AMERICA COMBINED. SHE ALSO HAS A PASSION FOR EMPOWERING WOMEN AND GIRLS AND IS FAMOUS FOR HER NON-PROFIT ORGANISATION AND ONLINE COMMUNITY LEANIN.ORG – WHICH ENCOURAGES WOMEN AND GIRLS TO ACHIEVE THEIR GOALS.

As part of our fifth anniversary, Ni Nyampinga caught up with Sheryl Sandberg to add her support to our Turamurika campaign (Together We Shine), which highlights the importance of supporting girls and each other. Read on to find out what inspires one of the most successful women in the world.

NN: Could you start by telling us about some of your proudest moments?

SHERYL: I am very proud of the role Facebook and Instagram play in the world. My favourite story is about a woman named Riza in the Philippines. She was commuting by boat to finish her degree. When a typhoon hit her island she couldn’t commute any longer, but through Free Basics – our programme that gives people free access to the internet – she was able to continue her education and graduate. Personally, I lost my husband very suddenly a year and half ago, and my son looked at me just last week and said, “Mommy, I’m happy”. That was a very proud moment because he's worked so hard and I’ve worked so hard to get them through the tragedy and to create a space where they can be okay.

NN: Many of our readers are girls between 13 and 15 years of age. We would like to know what you were like at that age?

SHERYL: I was a student very interested in studying, in a school that didn’t really value that.My best friend when I was in 7th grade told me I wasn’t cool enough to be her friend anymore and she just dropped me. So I made new friends, and I made new friends that other people said were the smart girls. That was code for being very uncool. We were not cool.We did not have dates. Boys did not like me. I did not get invited to the cool parties. But I had very close friendships with girls who are still my best friends today.

NN: Is there any advice you would have given to yourself at that age?

SHERYL: Study more. What matters is what I learned all the way through! That is what matters.

NN: Tell us about your parents? How did they support you growing up?

SHERYL: My parents were always there and supportive of me professionally. You know, I got married when I was very young. I was married at 24 and divorced at 25. That was hard for my parents. They said no one in our family had ever gotten divorced before. They had a very good marriage so it wasn’t something they were really expecting. It felt like a very big failure. On the professional side, my Mom and Dad wanted all their children to have all the opportunities. They had a son and two daughters and they wanted us to have all the opportunities in the world. 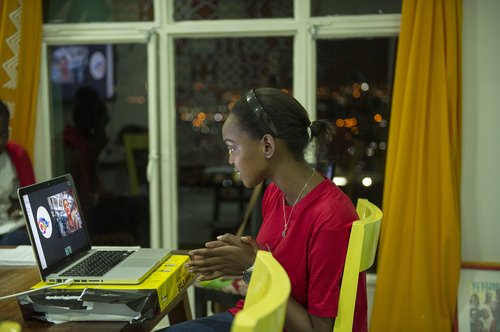 NN: At Ni Nyampinga, we believe in championing girls and the things that are important to them. And we know you too are a champion for girls. Why is it so important to support girls?

SHERYL: Because we are all stronger together! Because, there is systematic discrimination based on race, based on gender, based on all kind of things – religion, backgrounds and beliefs. Women are 50% of the population. 50%. If we support each other, we can overcome. And we can do it in small ways and we can do it big ways.

NN: Do you believe that someday the world will be a more positive place for girls, where they can feel safe?

NN: Thanks to Free Basics many people and girls are accessing Ni Nyampinga on their mobile phones for free. How do think social media and technology can benefit girls?

SHERYL: I think it’s really important because it give us voice. Our programme FreeBasics has given people free access to the internet. We have connected over 25 million people. We’ve had examples of women who have been abused by their cousin or partners. They didn’t realise they had legal rights but they have found out about it by connecting to the internet. It doesn’t solve all problems and there are a lot of big problems out there, but we believe it goes a very long way.

NN: As part of our new campaign, Turamurika, we are profiling inspiring girls and women. We know you are a role model to girls around the world. Do you have a role model?

SHERYL: I have so many. My Mom who is always so generous and giving. And I would say young people like you, you inspire me. Because look at what you are doing. Half way around the world and you can connect, write about things and inspire other young girls.

NN: Thank you so much. Finally, do you have a message for our readers?

SHERYL: It’s never too early to lean in. We really want to encourage all girls not just to participate, but also to lean in. And know inside that you can do it. 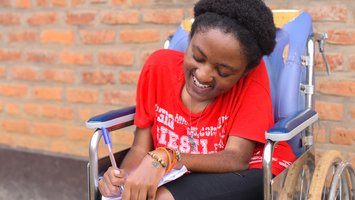 Her writing journey and passion for poetry...