Madeleine sits in the living room feeding her daughters. She holds one on her lap while the other three sit nearby, laughing and telling stories to each other. Madeleine smiles and starts to tell Ni Nyampinga about her changing relationship with her girls, “for years, I’ve been close with my daughters” she said, “we’ve been able to talk about almost everything, and I always encouraged them to speak freely with me about whatever was on their minds. But, despite that, there was some things I couldn’t bring myself to talk to them about, even though I knew in my heart I needed to. I wanted to start a conversation about the changes that happen to the body during puberty, but getting started was so hard!”

Madeleine, a mother of four girls and a primary school teacher, is a warm, generous person who puts the needs of her children above all else. She always knew how important it was to talk to her daughters about their reproductive health, but she struggled to initiate the conversation. “I knew I needed to talk to them about puberty and about how their bodies are going to change,” she said. “But I felt like there was no way to start. Talking about sexual health always seemed inappropriate in our culture, but I learned that that’s just not right.”

One Saturday, Madeleine was home with her daughters, chatting, eating lunch, and listening to some of the girls’ favourite music on the radio. The music they were listening to stopped and the radio launched into a jingle: “the Ni Nyampinga radio show is about to begin!”

“Because the show started with a song my daughters were interested and we stayed tuned,” Madeleine said. ‘Baza Shangazi’ came on. Shangazi was talking about puberty and changes in the body and I was like, ‘Yes!’ I felt so relieved. Now we had a starting point. After the show, I asked them if they understood everything that she was talking about.”

Since that day, Madeleine and her family have never missed an episode. It has become a launch pad for a weekly chat about puberty and sexual health. But Madeleine and her daughters’ relationship with Ni Nyampinga didn’t end there, Madeline told us excitedly, “I was listening to Ni Nyampinga on the radio all the time but I didn’t know there was a magazine too! One day, I got home from work and saw one of my daughters with a copy she had brought home from school. I flipped through it and stopped when I saw there were ‘Baza Shangazi’ pages. I was so happy –I called my daughters over to take a look.”

Now Madeleine uses both the radio show and the magazine to talk to her daughters about their sexual health. If they ask her a question and she doesn’t know the answer, she’ll pay a visit to the nearby health clinic so she can get accurate information for them.

Lilian is Madeleine’s oldest daughter. She told Ni Nyampinga that since her mother started talking to them about puberty their relationship has grown even stronger. “When I got my period for the first time, I tried to hide it from everyone. But, thanks to Shangazi, I learned that having a period is normal. Shangazi taught me about good hygiene and how to take care of myself when I’m on my period. But also, she helped my mother feel comfortable talking to us about our bodies. I now know I can trust my mum entirely and can ask her whenever I have a question about reproductive health.” 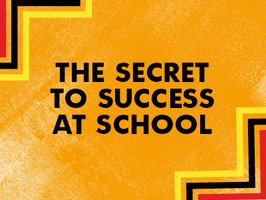 THE SECRET TO SUCCESS AT SCHOOL

Check out these great study tips